The Broadway Hill residential area was developed between 1898 and 1930. Historic preservation consultants who worked with the city to develop its historic preservation ordinance have outlined the area to run from First Street in the south to Tenth Street in the north and from H Street on the east to Alder/Division Streets on the west. Within these boundaries are what the consultants consider to be one of the largest intact, historic homes districts in the state. Most people in the city consider the Broadway Hill area to be much smaller, roughly a nine square-block area running from Eighth to Tenth and from Broadway to L Street. Here, the mill, related timber products industry, and commercial and retail enterprise owners of the area built their homes. The homes have been well cared for over the years and stand as testaments to the wealth made here in logging. At one time, more board feet of lumber shipped out of Aberdeen than any other port in the world and Aberdeen boasted more millionaires per capita than any other city in the United States. 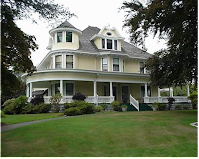 Twenty-six homeowners agreed to be featured in Our Aberdeen’s Broadway Hill brochure and website, approximately half the homes on the hill. We thank them very much for their cooperation and as well as that of Coast Title & Escrow, which supplied information on the earliest deeds they could find on the each of the properties. The early chain of ownership will introduce you to the founders of the city: Sam Benn, considered the father of Aberdeen, who plotted the lots on Broadway; the Hopkins brothers, who plotted the lots on Eighth, Ninth, Tenth, J, K and L; as well as the Schafers, the Andersons, the Middletons, the Wilsons, and the Polsons, among others, who “tried to cut it all.” And a much appreciated thanks to Cindy Lonn of the Harbor View Inn for the work she did in compiling her “Walking Tour of Broadway Hill” many years ago.

A project of Our Aberdeen: Website. Email us: ouraberdeenwebsites@gmail.com